As Ethereum became one of the most popular blockchains, its high adoption and use for currency exchanges and data interaction caused the network to reach its capacity (over 1 million transactions per day) and high demand for using it. This demand increased the gas fees that users are required to pay substantially.

The problem of Scalability

The popularly known blockchain trilemma involves being aware of providing a decentralized, secure and scalable network. However, to give decentralization and security, it must often sacrifice scalability.

At its current state, the Ethereum mainnet is only able to process 15 transactions per second. Usually, the network becomes congested, thus leading to slower transactions, increasing transaction fees, and becoming unusable for those who cannot afford them.

In this regard, the main goal of scalability is to increase transaction speed and throughput without sacrificing the other aspects of the trilemma: decentralization and security.

The scalability problem is a known issue addressed by the Ethereum community and the foundation. A solution for this is sharding.

Commonly, sharding consists of splitting a database horizontally to spread its load. In the blockchain, this could reduce the congestion and increase the throughput by creating new chains known as “shards”. Also, validators will no longer be required to process all transactions on the network.

A layer two solution corresponds to a separate blockchain that takes advantage of Ethereum layer 1, extending its security and decentralization mechanisms. Usually, it communicates with the layer one solution submitting bundles of transactions as just one transaction. It takes the transaction load away from Ethereum and then submits proofs of the validated transactions back to layer 1. Learn more about layer two solutions and check how they work.

A rollup bundles many transactions that get verified outside layer one and submits them as a single transaction, thus distributing the load and fees across the transaction senders in the rollup. Currently, there are two approaches to rollups: optimistic and zero-knowledge. The main difference is how they validate the transaction submitted to layer one. As we will focus on zero knowledge, check this detailed explanation about optimistic rollups.

A zk-rollup bundles up to thousands of transactions in a batch that gets executed off-chain. Instead of an optimistic rollup, it just needs to post a summary of all transactions rather than all transaction data on-chain, making them more scalable. The verification of these transactions comes in the form of a validity proof, which is used to update the zk-state and consists of cryptographical and mathematical calculation. This state is maintained by smart contracts on the Ethereum mainnet.

A zero-knowledge proof consists of a prover (in this case, the VM off-chain) who proves that a statement (a transaction or bundle of transactions) is valid without revealing the intrinsic method that verifies the information. So, for example, I can tell you I own an email address by sending an email notifying you I’m the guy sending it, but without revealing my credentials for anyone to check it.

A zk-SNARK (Zero-Knowledge Succinct Non-Interactive Argument of Knowledge) is a type of zero-knowledge proof that the proof itself is some data being verified without any interaction from the prover.
In short terms, it generates proof that some prover knows a witness that satisfies some program (i.e., A transaction or expression). For example, the following diagram illustrates the process of a simple zk-SNARK.

The main drawback of trying to take advantage of EVM’s characteristics is that the EVM works as a stack of data and operations computed to transition into states. While a zkEVM would necessarily need to include the zk circuit to prove the correctness of transactions processed. The more straightforward approach considers adapting the low-level side of the virtual machine to have this circuit but losing the tools and infrastructure already provided for the EVM. Some methods believe this in much or lesser detail and the access from developers and builders to a new type of EVM that is more Ethereum-like and takes advantage of the zk-rollup scalability.

In this regard, Vitalik Buterin, founder of Ethereum, and teams from projects working on zkEVM development described five types of zkEVM equivalences with the normal EVM.

This type of zkEVMs does not change any part of the current Ethereum system. Therefore, its primary goal is to verify transactions, blocks, and data as they are being verified today.
Its effect is to allow execution clients to be used as-is to generate and process rollup blocks.
However, it can take many hours to produce current proofs times for Ethereum blocks.

Type 2 zkEVMs look exactly like Ethereum but differ in ways, such as data structures and the state tree. Its main goal is to be compatible with existing applications today but modify Ethereum in some minor ways to ease development and increase the speed of proof generation. However, it still needs to improve in the prover time.
One can solve some worst-case scenarios for proof generation by increasing gas costs on specific operations. However, it may break some applications and reduce the developer toolkit compatibility. This operation is addressed as Type 2.5 zkEVM.

Type 3 zkEVMs sacrifice some features from the EVM to improve proof times. These features often belong to the precompiles smart contracts of Ethereum contracts; also the way they handle contract code, the VM memory, and its stack.
In this case, most applications already built on the well-known EVM are considered to work, but some of them will need to be rewritten in case they are using some of the functionalities removed on this type of zkEVMs.

This type of zkEVM compiles a smart contract code written in a high-level language (e.g., Solidity) into a ZK-SNARK-friendly language. This could drastically reduce the costs of building a zkEVM, but most of the tools already developed wouldn’t work (e.g., Debugging an EVM bytecode). Also, contracts wouldn’t have the same address as bytecodes could change on transpilation from language to language. 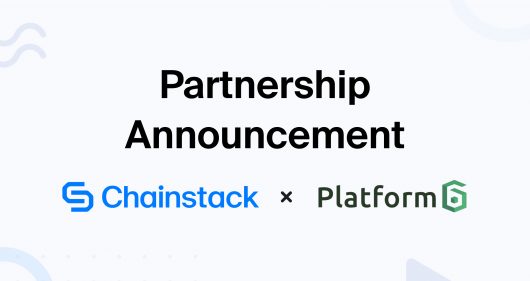 Platform 6, the most comprehensive solution for the off-chain side of decentralized applications, is now on Chainstack

We are partnering with Platform6, the easiest way for innovators, systems integrators and enterprises to build decentralized applications related to structured business document exchanges.